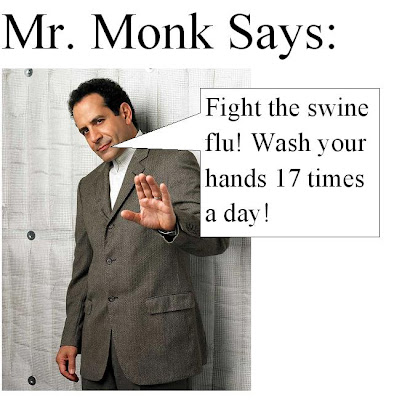 Just in case you con't know, that is actor Tony Shalhoub, who plays the obsessive-compulsive detective "Adrian Monk" on the USA Network. He really has not said anything publicly (that I know of) about the swine flu.
Posted by Cyril Morong at 11:56 AM No comments:

How Much Does It Cost To Raise A Child?

I don't know since I don't have any kids. But this article, How much does it really cost to have a baby? has some numbers. Here is one exerpt:

That all sounds like alot of money. Some of my students are parents. I am curious to see if you have anything to say about this issue.
Posted by Cyril Morong at 4:40 PM No comments:

This was actually a post from about a year ago. But it follows up on the last post about genes affecting investment decisions. The extra credit question on this week's quiz was "name a gene that affects investment decisions." Someone answered testosterone. Not a bad guess, but it is a hormone.

That is the name of an article you can read here. Here is an excerpt:

"Coates and Joe Herbert studied male financial traders in London, taking saliva samples in the morning and evening. They found that levels of two hormones, testosterone and cortisol, affected traders.

Those with higher levels of testosterone in the morning were more likely to make an unusually big profit that day, the researchers found. Testosterone, best known as the male sex hormone, affects aggression, confidence and risk-taking. Cortisol is tied to uncertainty, novelty and unpredictability, "which pretty much describes a trader's life," Coates said in a telephone interview.

Is Your Investing Personality in Your DNA?

That was the title of a WSJ article that you can read by clicking here.

Here are some key exerpts:

"Consider the FAAH gene. Roughly 25% of people with European ancestry carry the 385A allele of this gene. That tends to damp their brains' fear circuitry and to intensify their brains' reaction to the prospect of making money. Or take the DRD2 gene. Some 20% of Caucasians have an allele that can make them respond more intensely to gambles, even when no skill is involved."

Some people have brains that "crave the immediate gratification of a quick profit. "Controlling this kind of impulsive response to reward," says Dr. Hariri, "is crucial to success in many aspects of life" -- like investing, where impatience often lowers returns.

"Perhaps 20% of the variation in risk-taking among individuals is genetically determined; the rest comes from our upbringing, experience, education and training."

"But during scary times like these, says Dr. Hariri, "environmental stresses can play a critical role in unmasking any underlying biases determined by your genes." In other words, bear markets give nature the upper hand."
Posted by Cyril Morong at 7:15 PM No comments:

Layoffs May Be More Costly Than The Alternative

There is an interesting article called Layoffs not an option for some businesses. You might think that all a company has to do is layoff workers when the recessions hits. There may be good reasons to limit layoffs:

-when the economy picks up again, your company will be ready to ramp up production

-you can freeze hiring or cut seasonal workers

-you can cut or freeze salaries

-cut back on hours

-you have to train new workers you hire later on

-workers you hire later on may cost more
Posted by Cyril Morong at 5:09 PM No comments:

How Many Home Runs Would Babe Ruth Have Hit If Baseball Had Been Integrated In His Era?

To see the answer click here. And yes, economics is involved! In case you don't know, before 1947, all major league baseball players were white (there had been a few native Americans and light skinned hispanics, but not many). Ruth held the career HR record with 714 until Hank Aaron broke it in 1974. But since Ruth never had to face pretty much anything but white guys, there must have been some good pitchers he did not have to face. Had he faced more good pitchers, perhaps he would have hit fewer HRs. How many fewer is what I discuss at the above link.
Posted by Cyril Morong at 4:45 PM No comments:

My Favorite Economist Is Joseph Schumpeter

A student emailed me the correct answer tonight. It was Michelle Garza of the internet microeconomics course. Congratulations! She did a good job of following the hints. Recall the hint: "It will be "safe" to search for the answer even if you thought it might not be."

What is the opposite of being safe? It is dangerous and this blog is called "The Dangerous Economist?" Why is it called that? I have a link that explains why. Here is what it says:

"Why is this blog called The Dangerous Economist? Back in the early 1990s, I wrote a paper called "The Creative-Destroyers: Are Entrepreneurs Mythological Heroes?" It compares the entrepreneur in capitalism to the hero in mythology. I was never able to get it published in an academic journal. One referee even said the idea was dangerous. I doubt much harm would have befallen the U.S. economy had this paper been published. It is now online at

A shorter version is at

If you clicked on the link about why I chose this name for my blog and then these articles and read them you would have discovered some of the things that I list below and they would have pointed you to Schumpeter.

"The opening of new markets, foreign or domestic, and the organizational development from the craft shop and factory to such concerns as U. S. Steel illustrate the same process of industrial mutation if I may use that biological term-that incessantly revolutionizes the economic structure from with in, incessantly destroying the old one, incessantly creating the new one. This process of Creative Destruction is the essential fact about capitalism. It is what capitalism consists in and what every capitalist concern has got to live in" (p. 83).

In his book The Hero with a Thousand Faces, Joseph Campbell described the action of the hero with

"The standard path of the mythological adventure of the hero is a magnification of the formula represented in the rites of passage: separation-initiation-return: which might be named the nuclear unit of the monomyth. A hero ventures forth from the world of common day into a region of supernatural wonder: fabulous forces are there encountered and a decisive victory is won: the hero comes back from this mysterious adventure with the power to bestow boons on his fellow man. "(p. 30)

Campbell (1968) also has a section called "The Cosmogonic Cycle" which "unrolls the great vision of the creation and destruction of the world which is vouchsafed as revelation to the successful hero" (p. 38). The connection to Schumpeter's theory of creative destruction is clear. A successful entrepreneur simultaneously destroys and creates a new world, or at least a new way of life. Henry Ford, for example, destroyed the horse and buggy age while creating the age of the automobile. But even more to the point is the fact that the hero finds that the world "suffers from a symbolical deficiency" (p. 37) and that "the hero appears on the scene in various forms according to the changing needs of the race" (p. 38). The changing needs and the deficiency may directly correspond to the changing market conditions or the changing desires for products. The entrepreneur IS the first person to perceive the need or opportunity for market profits.

Obama To Pitch For The White Sox

April first 2009 will go down in history. Click White Sox Sign Obama For Left-handed Bullpen Support to read all about it. 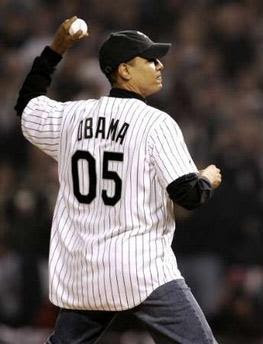 Posted by Cyril Morong at 1:02 PM No comments: