Fourth Quarter GDP Revised From A 2.8% Increase To A 3.1% Increase!

My students know how exciting this news is. See 4th Quarter U.S. GDP Revised Up to 3.1% Growth.

Why is this exciting? Let's suppose that per gapita GDP is $50,000 (it is a little less than that right now). Now what if over the next 20 years GDP (actually real GDP) rises every year by 3.1% instead of just 2.1%? How much difference will this make?

First, we need to say what the annual per capita GDP increase will be. Per capital GDP is GDP divided by population. What if we assume that population grows 1% per year. Then instead of an increase in per capita GDP of 3.1%, it would be about 2.1% (and instead of 2.8%, it will be about 1.8%).

One technical note. When you see numbers like this reported in the media, real GDP did not increase 3.1% in the fourth quarter. It means that if it increased at the rate it actually did for that quarter for a whole year, then the yearly increase would be 3.1%. It would have increased about 0.766% for the quarter. If it does that for 4 straight quarters, the GDP will end up being about 3.1% higher than it was before.
Posted by Cyril Morong at 5:26 PM No comments:

Will The Real Multiplier Please Stand Up?

In the past few weeks in my macro classes, we have talked about the government spending multiplier. But not all economists agree on what the numerical value of the multiplier is. See Much ado about multipliers: Why do economists disagree so much on whether fiscal stimulus works? from "The Economist" magazine in Sept. 2009. Here is an excerpt:

"Different assumptions about the impact of higher government borrowing on interest rates and private spending explain wild variations in the estimates of multipliers from today’s stimulus spending. Economists in the Obama administration, who assume that the federal funds rate stays constant for a four-year period, expect a multiplier of 1.6 for government purchases and 1.0 for tax cuts from America’s fiscal stimulus. An alternative assessment by John Cogan, Tobias Cwik, John Taylor and Volker Wieland uses models in which interest rates and taxes rise more quickly in response to higher public borrowing. Their multipliers are much smaller. They think America’s stimulus will boost GDP by only one-sixth as much as the Obama team expects."

Posted by Cyril Morong at 2:37 PM No comments:

Factors Influencing The Price Of Gas

See Gas prices are about more than just oil. Here are some excerpts:

"Gas prices rise when oil prices rise, and fall when oil prices fall — except when they don't. What you pay at your gas station depends on an array of factors, from what happens on an exchange in New York to what the competition is charging."

"Sellers of commodities, like gas station owners and refineries, price their product based not on what it costs to produce it, but on what it costs to replace it. Stations like the Plainfield BP, which gets shipments of gas several times a week, must constantly adjust their prices to keep up with the changing costs of their shipments.

Oil is the biggest factor in gas prices. It accounts for 50 to 70 percent of the cost."

"In the next few weeks, gas prices are expected to rise as refiners switch to a more expensive blend of gasoline designed to help protect against evaporation during the warmer summer months."

"A wholesaler like BP or Gulf each has its own formula for setting the rack price. In an attempt to smooth out the spikes and dips of the market, a wholesaler usually buys some of his fuel through long-term contracts. The rest is bought on the so-called spot market, priced at a given moment by a benchmark like the New York Harbor gasoline price."

""If gasoline prices drop a dime, a station will only pass along one or two pennies a day," says Patrick DeHaan, an analyst at GasBuddy.com, a website that collects and publishes retail gas prices. "They are slower to pass along the discount because they need to make up for money they lost when prices went up.""

Posted by Cyril Morong at 7:42 PM No comments:

88% Of Bavarian Doctors Give Their Patients Placebos

See Half of all German doctors prescribe placebos, new study shows: Placebo cures shown to help with depression and stomach complaints – in Bavaria, 88% of doctors have prescribed them. They might help save money, too. Here are excerpts:

"The report says placebos, from vitamin pills to homeopathic remedies or even sham surgery, can prove highly effective in various treatments."

""Placebos have a stronger impact and are more complex than we realised. They are hugely important in medicine today," says Christoph Fuchs, the managing director of the BÄK.

The report recommends that students and doctors should be taught about placebos and their usage.

"Placebos can maximise the effect of medication," says Robert Jütte, author of the study and a BÄK board member.

"They can reduce undesirable side-effects and are a more efficient usage of our healthcare budget.""

"Recent research, he said, showed that placebos had helped 59% of patients who had been suffering from an upset stomach. Used to treat depression, placebos have the same effect as antidepressants in about a third of cases.

The efficacy of a placebo depends on many factors, according to the report, including the size and colour of a pill.

The more expensive the placebo, the higher the success rate, the study found, and intravenous injections are shown to be more effective than oral medication.

It's also a question of trust. Placebos produce better results if a patient feels their doctor understands their concerns, and believes they are being taken seriously, the study says."

I have blogged about this before. See

Study: Half of American Doctors Give Patients Placebos Without Telling Them.

Can A Product Work Just Because It's Expensive?

Placebos: The More You Think They Cost, The Better They Work
Posted by Cyril Morong at 2:11 PM 2 comments:

See Woman Sells First Spot in iPad 2 Line For $900. She waited in line for 41 hours. This benefits no one one. No goods or services are created. It is wasted time and is inefficient. The iPad 2 starts at $499.

Apple should charge a higher price to begin with to avoid these long waiting lines. There is a shortage at the $499 price the first few days. They could start at $1000 and lower it $100 each day until it is back down to $499. Once these waiters get one they sell them for a very high price to someone else anyway and some go even higher than $1000 when sold on eBay.

Apple could get some great PR by donating the extra profit to charity. They could use that money to donate computers to schools. People who bought at the extra high price early on could get a t-shirt that says they support the Apple school computer initiative. So they could get to brag about their "donation."
Posted by Cyril Morong at 9:04 AM No comments:

Is It Getting Too Expensive To Go College?

Hedge-fund manager and author James Altucher says he will not be sending his kids to college. See Rethinking College as Student-Loan Burdens Rise. This link has both an article and a video clip. (Hat Tip: Frances Minten)

Here are some earlier posts on related topics:

Maybe That College Degree Is Not As Valuable As You Thought

Does It Pay To Go To College?
Posted by Cyril Morong at 1:09 PM No comments:

"The European Union's highest court declared illegal the widespread practice of charging men and women different rates for insurance, setting in motion an overhaul of how life, auto and health policies are written across Europe.

Two Belgian men had challenged the higher life-insurance premiums charged to members of their sex, arguing that it was discriminatory. In a ruling Tuesday, the Luxembourg-based European Court of Justice agreed.

"A study last year commissioned by the British insurers' group found excluding sex would have a particular impact on the auto policies of young women, whose premiums could rise by as much as 25%."

Posted by Cyril Morong at 4:25 PM No comments:

I saw this article mentioned at Carpe Diem, the blog of economist Mark Perry. It links an article in the New Yorker by James Surowiecki called The Tyrant Tax. Here is one paragraph:

"Healthy economies need a thriving and independent private sector, where resources are allocated by markets and competition, and where small and medium-sized businesses can flourish. But in most of the Middle East the state and big business are so tightly intertwined as to be indistinguishable, and competition has been discouraged in favor of central planning and private monopolies. It’s hard for entrepreneurs to start and run a business. Minimum capital requirements tend to be high, so you can’t get started without lots of cash, and getting business licenses and registering property are frequently arduous. Political favoritism is rampant, and byzantine regulations are difficult for outsiders to navigate. It’s instructive that the young man whose self-immolation helped set off the protests in Tunisia had had his fruit cart confiscated for violating some government rule."

"The state’s intrusive presence forces much economic activity off the books—in Egypt, eighty-five per cent of small businesses are in the “informal” sector—and this reduces growth, since informal businesses have a hard time getting credit or expanding beyond a certain size."

"Strict regulations enable the government to protect its friends in the private sector from competition, and bureaucrats line their own pockets, becoming further indebted to the system."

"Not surprisingly, when autocratic regimes in the region have tried to change their economies they’ve done so primarily with an eye toward maintaining power. In the past decade, countries like Egypt, Jordan, and Algeria have made vaunted public commitments to reform. But, as a recent study by the political scientist Oliver Schlumberger shows, reform did not, for the most part, aim at introducing genuine free-market competition, the most important feature of a healthy capitalist system. Instead, it strengthened what he calls “patrimonial capitalism”—a system in which the key determinant of success is how close you are to those in power."

Posted by Cyril Morong at 4:54 PM No comments:

Qatar Is The New Number One

In per capita GDP, that is. The table below shows the the top 10 countries in per capita GDP based on the the CIA's 2010 estimates (they are not all from 2010-Liechtenstein's estimate comes from 2007, for example). 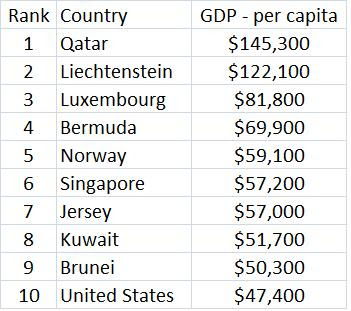 Click here to go to the CIA World Factbook. The numbers are based on "purchasing power parity," which means the differences in cost of living between countries is taken into account. But it does bother me that our most recent estimate for Liechtenstein is from 2007. With all their riches, they could be a threat. So maybe the CIA should pay closer attention to them.