Is It Okay To Use An App To Bribe Someone Into Going On A Date?

See Is Carrot Dating, the Bribe-Based Dating App, Really So Bad?. The author, Daniel Stuckey, suggests it is just an electronic means of doing what has long been done. It seems that people are always buying and selling something. Maybe even love, affection and companionship. Excerpts:


"In the convoluted hellscape that novelty dating sites live in, it takes a really unique feature to stand out. Take Carrot Dating. It's an app that incorporates a surface-level, quid-pro-quo-dating model, and might just be ridiculous enough to work. I instantly downloaded the app to find out.

In a piece published by Al Jazeera America yesterday, MIT entrepreneur and app creator Brandon Wade explains the concept of letting users (who may lack confidence, or sociability, or physical attractiveness) bribe incentivize potential dates that are supposedly hot with a wide range of lures. Bribes include:
The Internet erupted, calling Wade's app "thinly veiled prostitution," and shaming him and his carrot-stick concept before ever actually trying it. I think it's fair to say that, even if the app were requiring reciprocity in kind, a coffee isn't going to get me laid. My favorite bribe from this list is a tank of gas, but call me a sucker for indie movie romance.

But the Carrot Dating app does make a great point about transactional relationships. We live in a world in which expensive gifts and outlandish dinners are sometimes par for the course for attracting a mate. Whether that's bad or not depends on your own opinion, but is it any worse if the arrangement is laid out in an app?"

"But let's face it, most dates have some form or another of unbalanced reciprocity. Perhaps that's all that Carrot Dating is trying to highlight. Whether or not you've met "the one," you're likely making some sort of compromise. And likely, if you think about it, you're able to assess some type of value to whatever that compromise is. For instance, plastic people can be an unworthy investment of patience. And coffee can range from Dunkin' to artisanal pour-overs."

Posted by Cyril Morong at 8:17 AM No comments:

Will A Tax On Junk Food Help Mexico Fight Obesity?

This chart illustrates the issue. 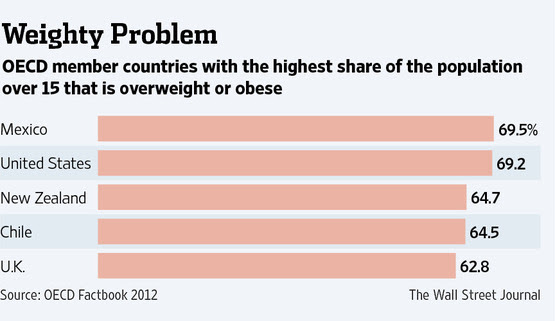 
"The House passed the proposed measure to charge a 5% tax on packaged food that contains 275 calories or more per 100 grams, on grounds that such high-calorie items typically contain large amounts of salt and sugar and few essential nutrients."

"Harold Goldstein, executive director of the California Center for Public Health Advocacy, called Mexico a role model, saying that the measures could protect the health of consumers while also shielding the economy from productivity losses and runaway public health costs."

"All that fat has contributed to an alarming rise in chronic illnesses like adult-onset Type 2 diabetes, which afflicts an estimated 15% of Mexicans over the age of 20, the highest rate for any country with more than 100 million inhabitants. Illnesses related to excess weight cost the Mexican public health system more than $3 billion a year, according to the legislation.

"Mexican industrial chamber Concamin estimates that processed food companies targeted by the new tax employ thousands of Mexicans and account for 4.1% of GDP. "We can't allow last-minute taxes," said Concamin president Francisco Funtanet, suggesting that companies might cut back on personnel and investment to absorb the tax hit.

Raul Picard, a top official at Concamin and owner of a chocolate company, argued that vice taxes could lead to a proliferation in contraband goods of questionable origin, possibly posing a threat to public health.
"There's no such thing as junk food, just junk diets," said Felipe Gómez, head of a regional food makers' group in Jalisco state. Even so-called junk food has carbohydrates and calories that the body needs, Mr. Gómez argued.

Academics say the move could hurt the poor because they spend a greater percentage of their income on cheap, packaged foods, but added that doing nothing was worse."

Posted by Cyril Morong at 11:44 AM No comments:

The Texas Economy Is The Time Magazine Cover Story This Week

See Does Texas portend the future of the United States? by George Mason University economics professor Tyler Cowen. Here is the excerpt he posted at his blog:


"Jed Kolko, chief economist for San Francisco–based real estate website Trulia, says that from 2005 to 2011, 183 Californians moved to Texas for every 100 Texans who moved to California. “Home prices, more than any other factor, cause people to leave,” Kolko says.

…the federal government calculated the Texas poverty rate as 18.4% for 2010 and that of California as about 16%. That may sound bad for Texas, but once adjustments are made for the different costs of living across the two states, as the federal government does in its Supplemental Poverty Measure, Texas’ poverty rate drops to 16.5% and California’s spikes to a dismal 22.4%. Not surprisingly, it is the lower-income residents who are most likely to leave California.

On the flip side, Texas has a higher per capita income than California, adjusted for cost of living, and nearly catches up with New York by the same measure. Once you factor in state and local taxes, Texas pulls ahead of New York—by a wide margin. The website MoneyRates ranks states on the basis of average income, adjusting for tax rates and cost of living; once those factors are accounted for, Texas has the third highest average income (after Virginia and Washington State), while New York ranks 36th."

It doesn't say if the cost of living takes into account quality of life. California might have more amenities like beaches or art museums (I really don't know). A place like San Diego has a great climate, where it rarely gets very hot or cold. But it is not clear how much difference any of this would make.
Posted by Cyril Morong at 12:22 PM No comments:

The $100 Bill Is Getting More Expensive

More expensive to produce, that is. Click here to find out how much more and why
Posted by Cyril Morong at 11:40 AM No comments:

The Biggest Cost Of The Government Shutdown

See Government shutdown side effect: no new craft beers by Carrie Antlfinger and Todd Richmond of the Associated Press. Excerpt:


"The federal government shutdown could leave America’s craft brewers with a serious hangover.

Stores will still offer plenty of suds. But the shutdown has closed an obscure agency that quietly approves new breweries, recipes and labels, which could create huge delays throughout the rapidly growing craft industry, whose customers expect a constant supply of inventive and seasonal beers.

Mike Brenner is trying to open a craft brewery in Milwaukee by December. His application to include a tasting room is now on hold, as are his plans to file paperwork for four labels over the next few weeks. He expects to lose about $8,000 for every month his opening is delayed.


‘‘My dream, this is six years in the making, is to open this brewery,’’ Brenner said. ‘‘I’ve been working so hard, and I find all these great investors. And now I can’t get started because people are fighting over this or that in Washington. ... This is something people don’t mess around with. Even in a bad economy, people drink beer.’’

The Alcohol and Tobacco Tax and Trade Bureau, or TTB, is a little-known arm of the Treasury Department. The agency will continue to process taxes from existing permit holders, but applications for anything new are in limbo."

Posted by Cyril Morong at 1:38 PM No comments:

No, really, I'm not kidding. See A Way of Life Is Ending. Thank Goodness by NICHOLAS D. KRISTOF of the NY Times. Excerpts:

"When child mortality drops and families know that their children will survive, they are more likely to have fewer babies — and to invest more in them."

"Ancient diseases are on the way out. Guinea worm and polio are likely to be eradicated in the coming years. Malaria has been brought under control in many countries, and a vaccine may reduce its toll even further."

"Poor people used to go blind routinely from disease or were unable to work for want of reading glasses. Now they are much less likely to go blind, and far more likely to get glasses."

"Some of the biggest gains resulted from economic growth in China and India."

"Despite the gains, a Pew poll early this year found that the budget area that Americans most wanted to cut was “aid to the world’s needy.” Perhaps one reason is that aid groups and journalists alike are so focused on problems that we leave the public mistakenly believing that the war on poverty and disease is being lost."

Posted by Cyril Morong at 11:41 AM No comments:

Today Is An Important Economic Anniversary

Click here to read all about it
Posted by Cyril Morong at 4:32 PM No comments:

Is College Financial Aid Shifting From Need To Merit?

See Freebies for the Rich by CATHERINE RAMPELL of the NY Times. Excerpts:


"Over the years, many state-university systems — and even states themselves — have shifted more of their financial aid away from students who need it toward those whose résumés merit it. The share of state aid that’s not based on need has nearly tripled in the last two decades, to 29 percent per full-time student in 2010-11. The stated rationale, of course, is that merit scholarships motivate high-school achievement and keep talented students in state."

"After years of state-funding cuts, many recognize that wealthy students can bring in more money even after getting a discount. Raising the tuition and then offering a 25 percent scholarship to four wealthier kids who might otherwise have gone to private school generates more revenue than giving a free ride to one who truly needs it."

"“nearly all” of the spending on state merit-based scholarships had little effect on keeping students in state after they graduated."

"A recent study by researchers at Harvard Kennedy School looked at a scholarship program in Massachusetts in which high-scoring students get tuition waivers at in-state public colleges. It found that taking the scholarship actually reduced a student’s likelihood of graduating because they ended up at a school with a completion rate lower than one of the other schools they could have gone to."

"Among needier kids, the six-year graduation rate is 45 percent when grants cover under a quarter of college costs versus 68 percent when they cover more than three-quarters"

"If you look at comparable stats for high-income students, the amount of aid makes almost no difference. Their graduation rates are around 78 percent either way."

"The share of 24-year-olds from families in the top-income quartile who hold college degrees rose from about 40 percent in 1970 to 70 percent in 2011. The share from the bottom quartile, however, remained pretty flat, edging up to 10 percent from 6 percent"

"having a higher density of college-educated workers boosts wages of even those around them without college degrees. Economists refer to the ripple effect as the “positive externalities” of higher education."

Posted by Cyril Morong at 11:41 AM No comments: