Why It Is Hard To Raise The Rate Of Economic Growth

See Why Trump can’t be Reagan: Economic plan of reviving a 1980s style boom in America is pie in the sky Ruchir Sharma.


"The potential growth rate of an economy is roughly determined by two factors: population and productivity. An economy can grow steadily only by adding more workers, or by increasing output per worker. During the Reagan years, both population and productivity were growing at around 1.7% a year, so the potential US growth rate was close to 3.5%. In short, Reagan did not push the nation’s economic engine to run faster than it could handle." [I would add that more capital or better technology can also increase the output per worker-CM]

"America’s population and productivity growth have fallen to around 0.75% each, generously measured, so potential economic growth is roughly 1.5%. Any policy package that aims to push an economy beyond its potential could easily backfire – in the form of higher deficits and inflation.

"global population growth has fallen to about 1%. The baby boom has gone bust. With the US population growth rate falling – last year to the slowest rate recorded since the 1930s – it is unlikely that any president could juice the economy to grow at 3.5% or more over the next decade."

"let’s assume Trump can more than double US productivity growth to the rate achieved in the Reagan era, 1.7%. Given the slowdown in population growth, that productivity miracle would raise the potential GDP growth rate to around 2.5%. If that doesn’t sound so different from 3.5%, consider that every percentage point of growth in the domestic economy is worth more than $100 billion"

"Comparing growth in the US unfavourably to China and India, as Trump has, makes little sense because poorer countries always tend to grow faster. If your starting income is lower, it’s easier to double it."

Posted by Cyril Morong at 3:23 PM No comments:

Economist traces almost half of the U.S. core-inflation slowdown this year to wireless services

By Ben Leubsdorf of the WSJ. Excerpt:


"A slowdown in inflation over the last couple of months seems to be coming from Americans’ smartphones.

Many private economists and Federal Reserve policy makers expected price growth would pick up this year, with unemployment low and the job market tightening. But core inflation—prices excluding the volatile categories of food and energy—rose just 1.9% in April from a year earlier, decelerating from 2.3% growth in January, as measured by the Labor Department’s consumer-price index. Core prices actually fell in March from the prior month, the first time that had happened in more than seven years.

Multiple forces are at work, including a glut of used cars pushing down vehicle prices and a deceleration in medical inflation. But Paul Ashworth, chief U.S. economist at Capital Economics, said in a research note this week that nearly half of the decline in core CPI inflation this year can be traced to a single item: wireless telephone services.

Cell-plan prices dropped 7% in March and fell an additional 1.7% in April, according to Labor Department data. From April last year, wireless service prices were down 12.9%, the largest decline in 16 years.

Mr. Ashworth attributed the drop to “the price war that has broken out among cell-phone service providers, with all the big providers now offering unlimited data plans at cheaper rates.”

Intense competition among cell-service providers like Verizon Communications Inc., Sprint Corp., T-Mobile US Inc. and AT&T Inc. has driven down prices for years and Verizon, the nation’s largest wireless carrier, in February followed its rivals in reintroducing unlimited-data plans.

As it happens, government statisticians in January had changed how they adjust available prices for cell-phone plans to account for features that improve quality. “In March, these procedures resulted in downward adjustments for many quotes based on changes in plans, largely in changes in data limits,” Bureau of Labor Statistics economist Steve Reed said in an email."

Posted by Cyril Morong at 9:46 AM No comments:

What Is The Full-Employment Unemployment Rate According To The Fed?

A recent article says 4.7%. See Fed Likely to Go Ahead With Rate Hikes Despite Trump Turmoil by Rich Miller of Bloomberg. Excerpts:

"Officials in March projected that the economy would grow 2.1 percent both this year and next, above their 1.8 percent estimate of its long-run cruising speed. They also reckoned that a 4.7 percent jobless rate was equivalent to full employment. Unemployment in April was 4.4 percent."

"Michael Feroli, chief U.S. economist at JPMorgan Chase & Co., said the course of inflation over the coming months will be more important in shaping the Fed’s plans than the political tumult in Washington.

Consumer-price inflation has slowed more than forecast in the last couple of months, raising questions about whether the Fed remains on track to achieve its 2 percent inflation target.

Feroli said the fundamentals point to inflation resuming its upward trend, with import and unit labor costs rising and the dollar falling.

As a result, he expects the Fed “to look past” the recent weakness in prices and raise interest rates again next month."


Here is some more information to help explain this issue.

We can see how this works in the following graph: 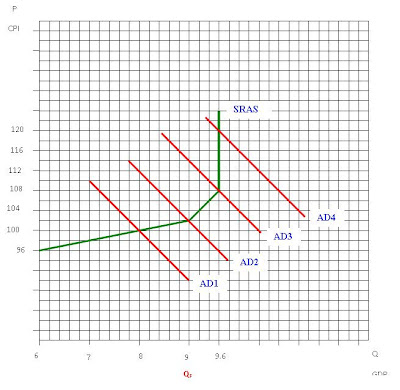 A GDP of $9 trillion is the "full-employment" GDP (QF). That gives us the lowest rate of unemployment compatible with "price stability" (price stability is an an annual inflation rate of 3% or less-although the article says 2% since that is what the Fed seems to be using these days). As GDP increases, more workers are hired, so unemployment falls. But if GDP is below QF, firms cannot raise prices. There is slack or "excess capacity" in the economy. That means that there will be very little pressure on prices. Resources are not very scarce and product prices don't have to be increased (or increased very much) to call them back into service.

But as GDP increases, resources become more scarce as more bidders want them. The more GDP increases, the faster prices increase. Also, less efficient resources get called into service and less efficiency means greater cost. The higher costs get passed along to the consumer in higher prices.

So, if there is a danger of AD going past QF the FED will raise interest rates to slow down private spending (both consumption and investment) to keep AD from moving too far to the right and prevent the higher rates of inflation.
Posted by Cyril Morong at 8:22 AM No comments:

Interesting New Book On Trade And Tariffs By Marc-William Palen

See The 'Conspiracy' of Free Trade: The Anglo-American Struggle over Empire and Economic Globalisation, 1846-1896. Here is the Amazon description:

"Following the Second World War, the United States would become the leading 'neoliberal' proponent of international trade liberalization. Yet for nearly a century before, American foreign trade policy was dominated by extreme economic nationalism. What brought about this pronounced ideological, political, and economic about-face? How did it affect Anglo-American imperialism? What were the repercussions for the global capitalist order? In answering these questions, The 'Conspiracy' of Free Trade offers the first detailed account of the controversial Anglo-American struggle over empire and economic globalization in the mid- to late-nineteenth century. The book reinterprets Anglo-American imperialism through the global interplay between Victorian free-trade cosmopolitanism and economic nationalism, uncovering how imperial expansion and economic integration were mired in political and ideological conflict. Beginning in the 1840s, this conspiratorial struggle over political economy would rip apart the Republican Party, reshape the Democratic Party, and redirect Anglo-American imperial expansion for decades to come."


Here is the author's bio

"Dr. Marc-William Palen is a historian at the University of Exeter. He specialises in the intersection of British and American imperialism within the broader history of globalisation since c. 1800. His commentary on historical and contemporary global affairs has appeared in the New York Times, the Australian, History Today, Time Magazine, Newsweek, the Globalist Magazine, the History News Network, History & Policy, Foreign Policy in Focus, and Common Dreams, among others. He is co-founder of History & Policy's Global Economics and History Forum. He is also the founding editor of the Imperial & Global Forum, the blog of the Centre for Imperial & Global History at the University of Exeter. You can follow him on Twitter @MWPalen"


Dr. Palen is from San Antonio. Here is a related post from a few months ago:

Mark Twain, Economist?
Posted by Cyril Morong at 10:31 AM No comments:

Here is the clue for Final Jeopardy on April 28:

Clue: "The annual labour of every nation is the fund which originally supplies it with all the necessaries and conveniences of life"

On Jeopardy, they give you the answer. So your response has to be in the form of a question.

The correct question: What is the Wealth of Nations?

Two of the three players got it right. One said Das Kapital (which was by Karl Marx)

Jeopardy, April 28, 2017. Scroll down to the bottom for Final Jeopardy.
Posted by Cyril Morong at 9:50 AM No comments: