Joseph Schumpeter And Me

Jeffery S. McMullen of Indiana University just published an article in the academic journal "Business Horizons." It is titled

"Are we confounding heroism and individualism? Entrepreneurs may not be lone rangers, but they are heroic nonetheless."

I have some information below on how to access this article.

McMullen cites a paper I wrote in the 1990s and mentions my name in the same sentence as Joseph Schumpeter, an important economist from the 20th century.

Click here to read a short bio of him

A few years ago I wrote a post called "My Favorite Economist Is Joseph Schumpeter."  Here it is

""Why is this blog called The Dangerous Economist? Back in the early 1990s, I wrote a paper called "The Creative-Destroyers: Are Entrepreneurs Mythological Heroes?" It compares the entrepreneur in capitalism to the hero in mythology. I was never able to get it published in an academic journal. One referee even said the idea was dangerous. I doubt much harm would have befallen the U.S. economy had this paper been published. It is now online at

A shorter version is at

If you clicked on the link about why I chose this name for my blog and then these articles and read them you would have discovered some of the things that I list below and they would have pointed you to Schumpeter.

"The opening of new markets, foreign or domestic, and the organizational development from the craft shop and factory to such concerns as U. S. Steel illustrate the same process of industrial mutation if I may use that biological term-that incessantly revolutionizes the economic structure from with in, incessantly destroying the old one, incessantly creating the new one. This process of Creative Destruction is the essential fact about capitalism. It is what capitalism consists in and what every capitalist concern has got to live in" (p. 83).

In his book The Hero with a Thousand Faces, Joseph Campbell described the action of the hero with

"The standard path of the mythological adventure of the hero is a magnification of the formula represented in the rites of passage: separation-initiation-return: which might be named the nuclear unit of the monomyth. A hero ventures forth from the world of common day into a region of supernatural wonder: fabulous forces are there encountered and a decisive victory is won: the hero comes back from this mysterious adventure with the power to bestow boons on his fellow man. "(p. 30)

Campbell (1968) also has a section called "The Cosmogonic Cycle" which "unrolls the great vision of the creation and destruction of the world which is vouchsafed as revelation to the successful hero" (p. 38). The connection to Schumpeter's theory of creative destruction is clear. A successful entrepreneur simultaneously destroys and creates a new world, or at least a new way of life. Henry Ford, for example, destroyed the horse and buggy age while creating the age of the automobile. But even more to the point is the fact that the hero finds that the world "suffers from a symbolical deficiency" (p. 37) and that "the hero appears on the scene in various forms according to the changing needs of the race" (p. 38). The changing needs and the deficiency may directly correspond to the changing market conditions or the changing desires for products. The entrepreneur IS the first person to perceive the need or opportunity for market profits.


Now here is the info on how to access the McMullen article.

The first link below is just some general info about the article. But the article itself is not readable online (unless you want to pay $35). If you go to the second link at ResearchGate, you can see his article listed. If you sign up for the service (it is free) you can request that the author send you a copy (that is how I got mine).

General info about the McMullen article

The second link at ResearchGate to request the article
Posted by Cyril Morong at 2:01 PM No comments:

How Long Have Economists Known About The Shortcomings Of GDP?

I occasionally hear about people who say we need a better measure of our economic welfare than GDP. But economists are not blind to its shortcomings. The textbook I use for my macro class includes a discussion of these issues. For example, GDP does not take into account how the quality of goods changes over time or how much leisure time we have and how that has changed over time.

There is also production that takes place outside of the market place. Economists have been aware of this since GDP was first created.

See What's the Value of US Household Production? by Timothy Taylor, Managing editor of the Journal of Economic Perspectives. He presents some comments made by economist Simon Kuznets in 1934. Kuznets was the author of the 1934 report to Congress "National Income, 1929-1932." He also won a Nobel Prize in Economics in 1971.

Here is one part of that report, from Mr Taylor's post:


"The volume of services rendered by housewives and other members of the  household toward the satisfaction of wants must be imposing indeed,  when totaled for the 30 million families comprising the population of  this country; and the item is thus large enough to affect materially any estimate of national income. But the organization of these services  render them an integral part of family life at large, rather than of the specifically business life of the nation. Such services are, therefore, quite removed from those which gainfully occupied groups undertake to perform in return for wages, salaries, or profits. It was considered  best to omit this large group of services from national income, especially  since no reliable basis is available for estimating their value. This  omission, unavoidable though it is, lowers the value of national income  measurements as indexes of the nation's productivity in conditions  of recent years when the contraction of the market economy was accompanied by an expansion of activity within the family. ... Thus, the estimates submitted in the present study define income in such a way as to cover primarily only  efforts whose results appear on the market place of our economy.  A student of social affairs who is interested in the total productivity  of the nation, including those efforts which, like housewives' services,  do not appear on the market, can therefore use our measures only with some qualifications.""

Click here to learn more about Kuznets' contributions to economics
Posted by Cyril Morong at 8:48 AM No comments:

The percentage of 25-54 year-olds employed increased in February

We could look at the employment to population ratio instead, since that includes those not in the labor force. But that includes everyone over 16 and that means that senior citizens are in the group but many of them have retired. The more that retire, the lower this ratio would be and that might be misleading. It would not necessarily mean the labor market is weak.

Here is the timeline graph of the percentage of 25-54 year-olds employed since 2007. Notice how we had been rising before 2016 but it seems to be flattening out.

Posted by Cyril Morong at 7:04 AM No comments:

What Industries Have The Highest Profit Rates?

See The Most Profitable Industries in 2016 by Mary Ellen Biery of Forbes. A student asked about profit rates in class recently since this comes up when we cover market structures. For example, we expect firms in perfect competition to earn an average profit rate or rate of return because, if they are above average, more firms enter, driving prices and the profit rate back down. When there is not enough competition, firms can stay above average. Excerpts:

"Which U.S. industries are the most lucrative? The answer depends on how it’s measured, but based on pre-tax net profit margin, the top money-makers include specialty service providers in accounting, law, health care and real estate, according to the latest ranking from Sageworks, a financial information company.

Accounting-related companies (accounting, tax preparation, bookkeeping and payroll service companies) are the most profitable, with net profit amounting to 18.3 percent of sales, on average, based on a financial-statement analysis for privately held companies for the 12 months ended June 30.  Legal services firms and real-estate leasing companies are tied for second and third in profitability, with average net profit margins of 17.4 percent. These industries often make the cut for Sageworks’ annual ranking. 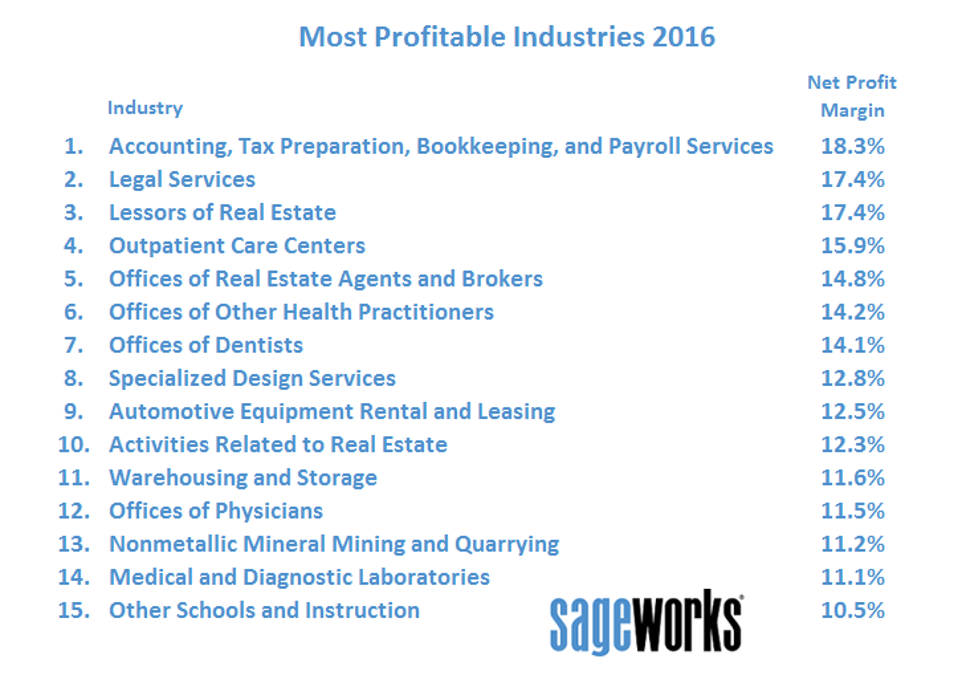 “Some businesses tend to have healthier bottom lines by the very nature of the industries that they operate in,” said Sageworks analyst James Noe. Many of the most profitable industries sell services rather than products, he noted, so their operations don’t require raw materials or other up-front costs that would wind up in the middle of their income statements and eat into the bottom line. “They don’t sell or produce finished goods,” he said. “They don’t make the tractors to sell to farmers or they don’t buy groceries to sell to consumers. In other words, you don’t need plastic to provide an audit for a company; it’s just mostly human capital that’s being utilized, and that lends to a high margin generally.”


Among privately held companies across all industries, the average net profit margin for the 12 months ended June 30 was 7.7 percent. Through its cooperative data model, Sageworks collects and aggregates private-company financial statements from accounting firms, banks and credit unions. Net profit margin has been adjusted to exclude taxes and include owner compensation in excess of their market-rate salaries. These adjustments are commonly made to private-company financials in order to provide a more accurate picture of the companies’ operational performance."

Here is another good link on profit rates
Posted by Cyril Morong at 2:29 PM No comments: