Dave Brubeck died on December 5. The music the Jazz Protagonists played last night was great, lots of Brubeck's best stuff. Here is a link to their site:

It seemed more crowded than usual at Boardwalk Bistro and I think many people came especially for the music.

Dave Brubeck made the cover of time magazine in 1954, just before he turned 34. Here is the cover 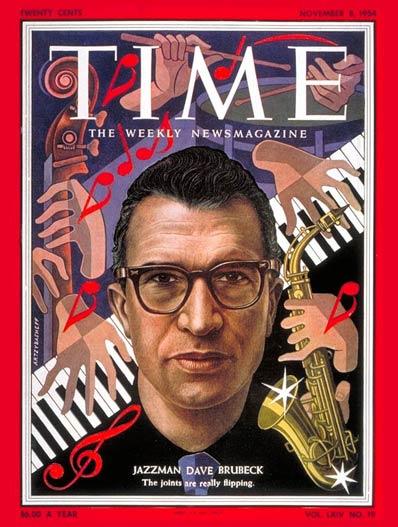 Here is a link to a post from a couple of years ago: Dave Brubeck, Economist
Posted by Cyril Morong at 2:53 PM No comments:

Jerry Seinfeld, Like The Novelist Marcel Proust, Is A Neuroscientist

Here is what Jerry Seinfeld said in last Sunday's New York Times Magazine about why he keeps practicing his stand up act:


"When he can’t tinker, he grows anxious. “If I don’t do a set in two weeks, I feel it,” he said. “I read an article a few years ago that said when you practice a sport a lot, you literally become a broadband: the nerve pathway in your brain contains a lot more information. As soon as you stop practicing, the pathway begins shrinking back down. Reading that changed my life. I used to wonder, Why am I doing these sets, getting on a stage? Don’t I know how to do this already? The answer is no. You must keep doing it. The broadband starts to narrow the moment you stop.”"

See Jerry Seinfeld Intends to Die Standing Up. I like this part, too:


"Seinfeld believes funniness is genetic. When his father, Kalman, was stationed in the Pacific during World War II, he’d transcribe jokes he heard and store them in a box for safekeeping. “In the army, that’s kind of how you got through it,” Seinfeld says. “People would tell jokes by the score, because what else are you going to do to maintain sanity? The recognizing of jokes as precious material: that’s where it starts. If you’ve got the gene, a joke is an amazing thing. It’s something you save in a box in a war.”"

Everyone knows that Proust sas a neuroscientist because there is a book by that title. Click here to go to the Amazon link. Here is their description:


"In this technology-driven age, it’s tempting to believe that science can solve every mystery. After all, science has cured countless diseases and even sent humans into space. But as Jonah Lehrer argues in this sparkling debut, science is not the only path to knowledge. In fact, when it comes to understanding the brain, art got there first.

Taking a group of artists — a painter, a poet, a chef, a composer, and a handful of novelists — Lehrer shows how each one discovered an essential truth about the mind that science is only now rediscovering. We learn, for example, how Proust first revealed the fallibility of memory; how George Eliot discovered the brain’s malleability; how the French chef Escoffier discovered umami (the fifth taste); how Cézanne worked out the subtleties of vision; and how Gertrude Stein exposed the deep structure of language — a full half-century before the work of Noam Chomsky and other linguists. It’s the ultimate tale of art trumping science.

More broadly, Lehrer shows that there’s a cost to reducing everything to atoms and acronyms and genes. Measurement is not the same as understanding, and art knows this better than science does. An ingenious blend of biography, criticism, and first-rate science writing, Proust Was a Neuroscientist urges science and art to listen more closely to each other, for willing minds can combine the best of both, to brilliant effect."

It was in today's paper. Here is the link: Cut government spending to boost economy. Here is the article in case the link does not last very long.

Re: “Laffer Curve a tool to help avoid fiscal cliff,” Other Views, Dec. 10:

He correctly explained the Laffer Curve, which relates tax revenue and tax rates. His reading of the historical record leads him to say the high tax revenue and budget surpluses of the late 1990s were due to raising the top tax rate to 39.6 percent in 1993.

We must realize that maximizing the federal tax revenue is not an official policy goal. The goals are low unemployment, low inflation and high GDP growth. Now if tax revenue is spent wisely on things like education and infrastructure, it can help the economy grow. But this is not always the case.

Higher tax rates hurt economic incentives. Investment decisions are made at the margin, based on after tax income.

As tax rates rise, some investments are no longer viable. Less investment, less growth. A slight change makes a big difference in the long run. For example, in 2010, liberal economist Paul Krugman mentioned that the per capita GDP since 1980 had grown 1.95 percent annually in the U.S. and 1.83 percent in the European Union, hinting that their higher tax rates were not a problem. But, if per capita income was $20,000 in both the U.S. and the E.U. in 1980, the per capita income now would be $1,372 higher in the U.S. at those annual growth rates. After 100 years, the U.S. income level would be 12 percent higher.

The harm taxes do to economic efficiency is called “deadweight loss.” It grows exponentially; more harm is done in raising rates from 35 to 40 percent than in raising rates from 30 to 35 percent. If the Bush tax cuts expire, some Americans in states like New York (which has its own income tax) will pay marginal tax rates of over 50 percent, if you include additional taxes to pay for Obamacare.

Roth says we should take a lesson from the 1990s. But in 1997 President Clinton agreed to cut the capital gains tax to 20 percent It is possible that the high tax revenue of the late 1990s was due to a fast growing economy which in turn was caused by the high tech boom and low oil prices.

William McBride of the Tax Foundation found in a survey of studies that “lower-tax economies are more productive and that raising taxes has negative dynamic effects on revenue collection.”

Spending may be a bigger issue than tax revenue (Roth did call for less spending). As former World Bank Group president Robert Zoellick recently said, “Federal spending has traditionally been about 18-19 percent of the U.S. economy. It has now surged to 23-24 percent.”

Leszek Balcerowicz, the former central banker of Poland, says that countries grow rapidly out of recessions when they cut spending since this increases confidence in markets. Let's give that a try.

Cyril Morong, Ph.D., is an associated professor of economics at San Antonio College.

Posted by Cyril Morong at 3:14 PM No comments:

President Obama Vs. Nassim Nicholas Taleb: Who Has The Best Statement For NATIONAL ﻿ENTREPRENEURS' DAY?

Here is what President Obama said:

Nicholas Taleb has also proposed a NATIONAL ﻿ENTREPRENEURS' DAY. Here is the statement he wants read:


“Most of you will fail, disrespected, impoverished, but we are grateful for the risks you are taking and the sacrifices you are making for the sake of the economic growth of the planet and pulling others out of poverty. You are the source of our antifragility. Our nation thanks you.”

Click here to learn more. Taleb is the author of such books as Antifragile: Things That Gain from Disorder and The Black Swan: The Impact of the Highly Improbable.
Posted by Cyril Morong at 1:07 PM No comments:

Here is the link

It is by Paul McManus. It is "An exploration of entrepreneurial thought and action for high impact entrepreneurial builders & leaders, social innovators and global changemakers."

Paul Desmond played the alto saxophone with the Dave Brubeck Quartet. He said that he wanted to sound like a dry martini. On this CD, Jensen pays homage to Desmond and it sounds great.

Click here to go to the Amazon page for the CD. You can listen to samples of all the songs. "Take Five" is one of them.

Click here to go to Jensen's home page. It has links to videos of his performances.
Posted by Cyril Morong at 10:42 AM No comments:


"Customers of all sorts of businesses in Greece will be able to walk away without paying if they don't receive a record of their transaction, under rules set to take effect soon.

Restaurants—seen as among the worst offenders, in part because much of their business is transacted in cash—will be required to add a notification about the right to refuse payment to their menus. But everyone, from doctors and lawyers to plumbers and taxis, also is liable to be stiffed if they don't give receipts.

The new regulations are the latest effort by the cash-strapped Greek government to crack down on endemic tax evasion—adding an extra incentive for businesses to issue receipts. The receipts produce a record of the transactions, and authorities use that record to calculate taxes owed by the business.

"With this measure the consumer is protected and a bold step is taken against tax evasion," said Athanasios Skordas, Greece's deputy development minister.

The "shadow economy" accounts for about 24% of Greek gross domestic product, according to a study by Margarita Tsoutsoura of the University of Chicago Booth School of Business. Tax dodging costs Greece about €28 billion ($36 billion) a year, an amount equivalent to roughly 15% of annual economic output, the study says."