The Bureau of Labor Statistics has records going back to 1913. See CPI Detailed Report: Data for January 2014. It is a PDF file and you need to find Table 24.

It might be easier to see all the data at this site.

The chart below shows the annual inflation rate for each year since 1914. There are two methods. One that only looks at the CPI in December of each year and finds the percentage change (blue line). The other method averages the CPI for all 12 months in each year and then finds the percentage change. Notice that they tend to be pretty close. But not always. See a post from 2010 called What Was The Rate Of Inflation Last Year? Was It Positive Or Negative? 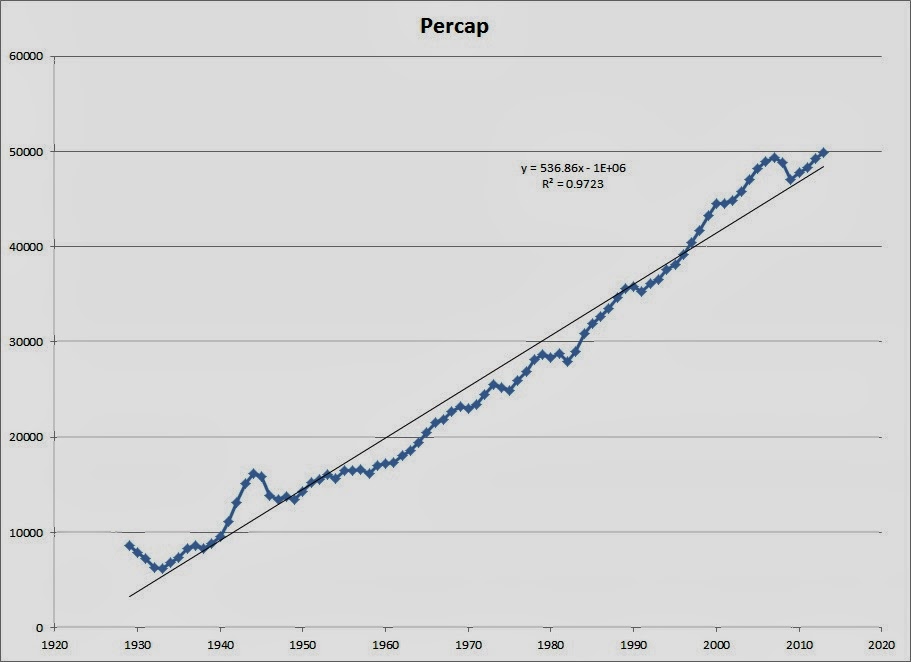 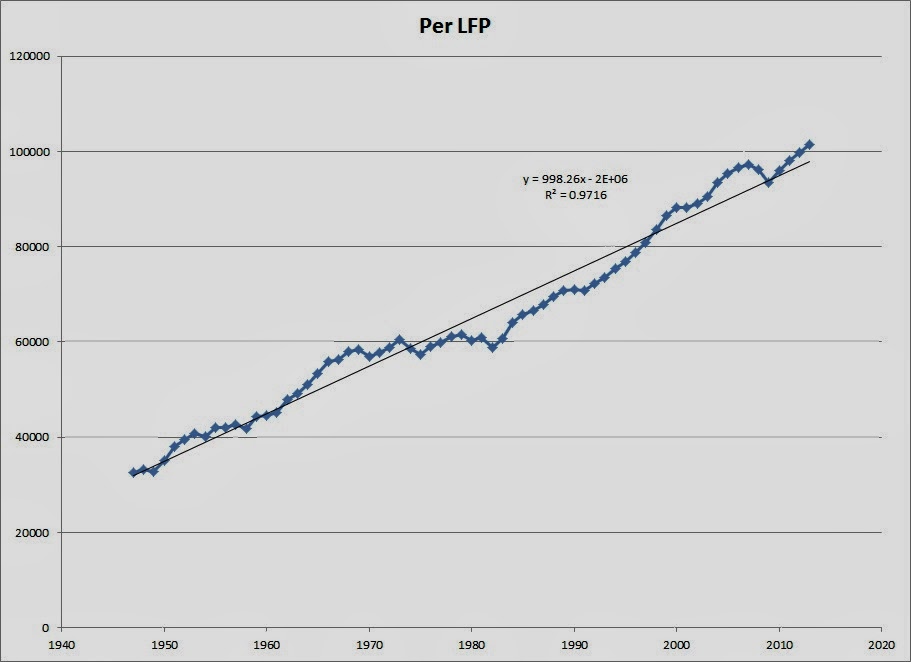 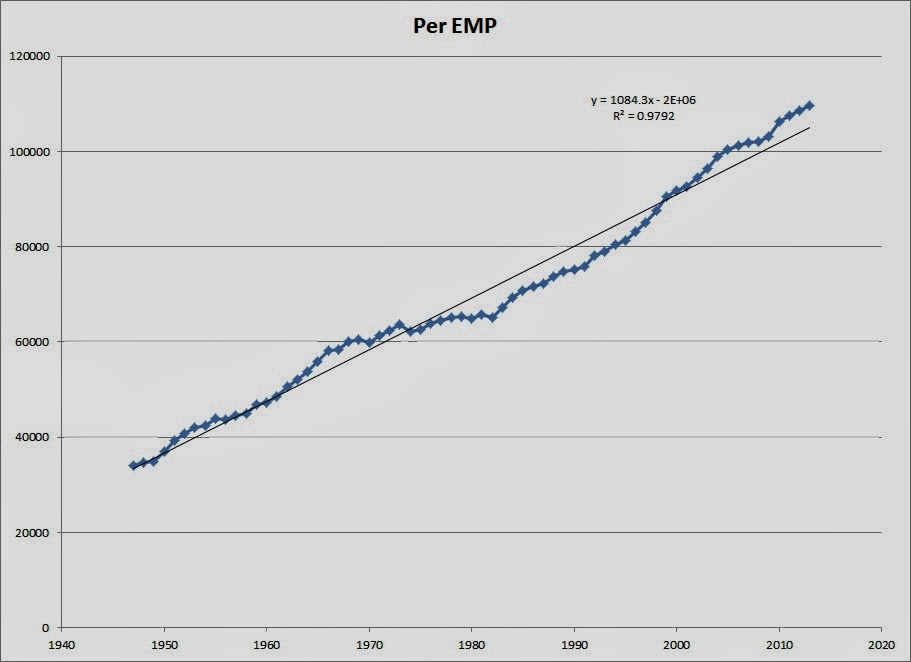 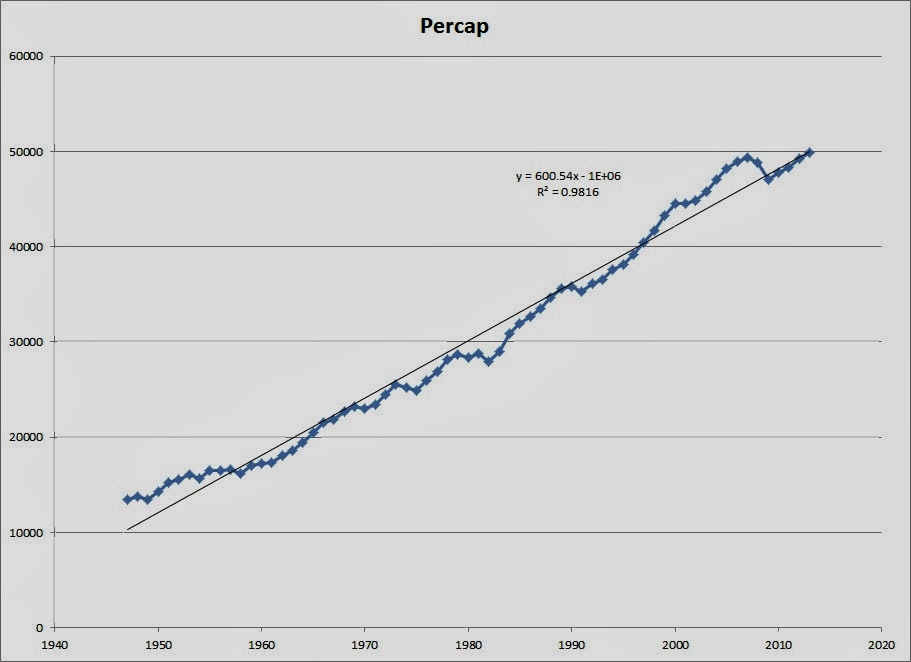 Posted by Cyril Morong at 10:41 AM No comments:


"Young adults with just a high-school diploma earned 62 percent of the typical salary of college graduates. That's down from 81 percent in 1965, the earliest year for which comparable data are available."

"... college graduates ages 25 to 32 who were working full time now typically earn about $17,500 more annually than employed young adults with just a high school diploma ($45,500 vs. $28,000); those with a two-year degree or some college training earned $30,000. In 1965, before globalization and automation wiped out many middle-class jobs in areas such as manufacturing, the inflation-adjusted gap was just $7,449.

Young adults with just high-school diplomas now are also much more likely to live in poverty, at 22 percent compared to 7 percent for their counterparts in 1979."

"About three-fourths of all college graduates say they regretted not doing more during school to better prepare themselves to find a job, such as getting more work experience, studying harder or looking for work sooner."

Posted by Cyril Morong at 10:25 AM No comments:

Below is a repeat of last year's Valentine's day post. I am not sure if the links are still working:

The first one is Researchers at AAAS Annual Meeting Explore the Science of Kissing . The following quote gives you an idea of what it is all about: "Kissing, it turns out, unleashes chemicals that ease stress hormones in both sexes and encourage bonding in men, though not so much in women." I guess economists call this "interdependent utility functions." Meaning that what brings one person pleasure brings brings the other person pleasure, and vice-versa.

The other is Cocoa Prices Create Chocolate Dilemma. The article opens with "Soaring cocoa prices are creating a Valentine's Day dilemma for chocolate makers. They don't want to raise retail prices when recession-weary consumers are trying to limit their spending." The problem is crop diseases in Ivory Coast and Ghana. You might need to be a WSJ subscriber to read the whole article.

Here is a new article from yesterday's San Antonio Express-News (2-13-2011). Romance in bloom at workplace: Survey indicates 59% have taken the risk-filled leap. It seems like many people admit to having a romance at work and/or meeting their spouse at work. So what starts out as economic activity leads to some other needs being met.

The study of romantic love can provide insight into the general process of introducing novelty into a system of interacting variables. Novelty, however, is functional only in an open system characterized by uncertainty where the variables have not all been functionally looped and system slacks are readily available to accommodate new things. In a closed system where all the objective functions and variables must be compatible to achieve stability and viability, adjustments in the value of some variables through romantic idealization may be dysfunctional if they represent merely residual responses to the creative combination of the variables in the open sub-system."

The author was K. K. Fung of the Department of Economics, Memphis State University, Memphis. It was from a journal article in 1979. More info on it is at this link. The entire article, which is not too long, can be found at this link.

Then there was this related article: Love really is blind, U.S. study finds. Here is an exerpt:

"Love really is blind, at least when it comes to looking at others, U.S. researchers reported on Tuesday.

College students who reported they were in love were less likely to take careful notice of other attractive men or women, the team at the University of California Los Angeles and dating Web site eHarmony found.

"Feeling love for your romantic partner appears to make everybody else less attractive, and the emotion appears to work in very specific ways in enabling you to push thoughts of that tempting other out of your mind," said Gian Gonzaga of eHarmony, whose study is published in the journal Evolution and Human Behavior.

"It's almost like love puts blinders on people," added Martie Haselton, an associate professor of psychology and communication studies at UCLA."

How to Be a Better Valentine, Through Economics by economist Paul Oyer.

Can Giving Up Money And Material Things Lead To More Love?

What Do Men In China Need To Get A Bride?

Can You Put A Price Tag On Love?

Do Opposites Attract? Not Usually, Except Maybe When It Comes To Money

Return of the Love Headhunters

eHarmony To Provide Personal Counselors To Help You Find Mr. Or Ms. Right

Economist Paul Zak, aka Dr. Love (he studies the brain with "neuroeconomics")
Posted by Cyril Morong at 12:20 PM No comments:

The San Antonio Express-News Printed An Article By Me

"I think Esther J. Cepeda presents a false dichotomy between “following your bliss” and “grinding it out” (“Hard work trumps doing what you love,” Other Views, Jan. 24). She says we need more people who “grind it out” and work hard starting businesses instead of people doing what they love and that “love and passion” are no “substitutes for hard work.”

What if hard work and passion complement each other? This would erase the conflict she sees.

Anders Ericsson, a psychology professor at Florida State University, says “when it comes to choosing a life path, you should do what you love — because if you don't love it, you are unlikely to work hard enough to get very good.” And he advocates hard work — lots of it.

You will “grind it out” if you are doing something you love. Some neuroscience research says that when we do what we love, we form new connections in our brain that increase our skill. At the same time, the release of dopamine that gives us pleasure also helps form these connections.

Cepeda did not mention mythologist Joseph Campbell, who championed “following your bliss” in the 1980s. He wrote the book The Hero With a Thousand Faces (one of the inspirations for “Star Wars”).

It is not commonly known that Campbell said entrepreneurs, the grinders Cepeda lauds, were the real heroes in our society. Business can be a fulfilling adventure, like art or science.

Maybe our society does not have enough grinders starting new companies because of our negative attitudes toward business. Look at popular portrayals of capitalists such as J.R. Ewing and Gordon Gekko. This may be why young people are not likely to see business as a noble and worthy quest. Our national narrative needs to change.

Nobel Prize-winning economist Edmund Phelps has pointed out that we have lost our innovative spark, and certainly the images of capitalists in movies and TV do not help.

Calling entrepreneurs heroes does not mean we should exempt them from ethical behavior. It is not a license to defraud or harm the public. We cannot, however, completely avoid some negative effects of business, such as pollution. But that is something we can tax.

Educator Candace Allen has pointed out that if we do not honor entrepreneurial accomplishment, we will not get enough entrepreneurs.

As President Barack Obama has said, “No government program alone can take the place of a great entrepreneur.” Our national dialogue needs to include the vital role they play. Even those who start, as Cepeda says, boring businesses such as dry cleaner and fast-food franchises.

Those entrepreneurs may be the heroes on the front line of our economy. And who does not love being a hero? That might get people to do the hard work Cepeda wants done."

Click here to see the article with the quote from President Obama. It was in The Wall Street Journal, May 2, 2013. The article was titled "Billionaire Executive Pritzker Picked for Commerce Post."
Posted by Cyril Morong at 8:13 AM 2 comments:

The Navajo Nation. See Navajos Vote to Try Junk-Food Tax in Fight Against Obesity by Ana Campoy of The Wall Street Journal.

This week two of my classes picked a chapter on obesity to read from the book The Economics of Public Issues. Rising obesity rates are partly a result of food getting cheaper and people leading more sedentary lives (which in turn is a result of rising relative pay for jobs that don't require as much physical exertion).

Here are excerpts from the WSJ article:

"Leaders of the Navajo Nation, whose people are struggling with obesity, along with those of numerous other Native American tribes, voted to impose higher taxes on junk foods while eliminating taxes on healthier alternatives.

The changes, passed Thursday by the Navajo Nation's tribal council, represent the latest attempt by U.S. communities to use legislation to encourage people to eat more healthily.

Under the proposed laws, which require approval by the tribe's president, taxes on soda and fatty snacks will go up to 7% from the current 5%, while fresh fruits, vegetables and nuts won't be taxed at all."

"Opponents, including some Navajo lawmakers, said members of the impoverished tribe couldn't afford higher taxes on anything. They predicted the tax changes would drive some to purchase items such as soda and potato chips at stores outside the reservation."

"Supporters of the Navajo junk-food tax said it was necessary given the rate of obesity and diabetes on Indian reservations. Roughly one in three Navajos is diabetic or pre-diabetic, and anywhere between 23% and 60% are obese, according to data presented to the tribal lawmakers.


Native Americans in general are 60% more likely to be obese than non-Hispanic whites, and more than twice as likely to be diagnosed with diabetes, according to the U.S. Department of Health and Human Services."

Another thing  about obesity is that it seems like if you are obese as a very young child, you tend to stay that way. See Obesity Is Found to Gain Its Hold in Earliest Years by GINA KOLATA of The New York Times. Excerpt:

"For many obese adults, the die was cast by the time they were 5 years old. A major new study of more than 7,000 children has found that a third of children who were overweight in kindergarten were obese by eighth grade. And almost every child who was very obese remained that way.

Some obese or overweight kindergartners lost their excess weight, and some children of normal weight got fat over the years. But every year, the chances that a child would slide into or out of being overweight or obese diminished. By age 11, there were few additional changes: Those who were obese or overweight stayed that way, and those whose weight was normal did not become fat."

Posted by Cyril Morong at 12:01 PM No comments: