The Fed, or Federal Researve Board, controls monetary policy in the United States. The more money in the economy, the more demand for all goods and services, holding all other factors constant (this total demand is called aggregate demand or AD). The price level in the economy and the total output or quantity produced in the economy is determined by the interaction of AD and aggregate supply (in this case I am interested in something called short-run AS or SRAS-so yes there is a long-run AS but that is not the important issue here).

The graph below shows two possible AD lines. Notice that as AD moves to the right, the price level (and therefore the inlfation rate) will increrase faster and faster. So we need to be careful not to let AD move past QF, which is called the full-employment GDP or level of output. But right now Fed officials disagree as to how close AD is to this point. The closer it is, the more careful we have to be in increasing the money supply.

"His views contrast with those of others, including St. Louis Federal Reserve Bank President James Bullard, who this week warned that the existence of "slack" could be exaggerated, posing potential inflation problems in the medium term."

In the graph below, I have two AD lines, on representing the comments of each economist. The one for Kohn has alot more room to move to the right without increasing prices or inflation very much. If he is right, then there is alot more the Fed can do to help the economy recover. But if Bullard is right, and if the Fed tries to add money and AD to the economy, prices will rise very quickly because the SRAS line starts getting very steep past QF. 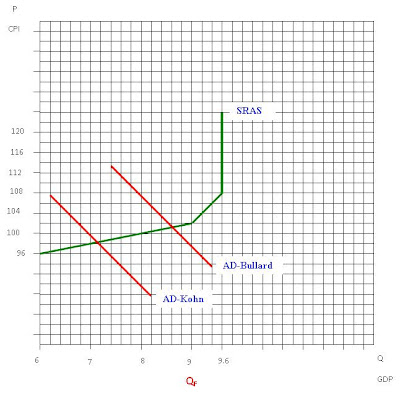 There shouldn't be much of a threat of inflation as we speak. There doesn't appear to be an abundance of cash floating around in the economy. Perhaps a little bit during the upturn and/or when this Recession is over.

I tend to agree that inflation is not a threat, but one Fed official is worried. We never really know for sure.