Below is a graph from Macroeconomics (6th Edition) by Andrew B. Abel, Ben S. Bernanke and Dean Croushore. A question about this came up in my micro class this week. Here is how they describe the graph in the book:

"U.S. exports and imports,1869-2005 The figure shows U.S. exports (black) and U.S. imports (red), each expressed as a percentage of total output. Exports and imports need not be equal in each year: U.S. exports exceeded imports (shaded gray) during much of the twentieth century. During the 1980s, 1990s and early 2000s, however, U.S. exports were smaller than U.S. imports (shaded red). Sources: Imports and exports of goods and services: 1869-1959 from Historical Statistics of the United States, Colonial Times to 1970, pp. 864-865; 1960-2005 from FRED database, Federal Reserve Bank of St. Louis, research.stlouisfed.org/fred2/series/BOPX and BOPM; output is from Fig. 1.1."

The output data from Fig. 1.1 comes from an article by Christina Romer.

The percentages seem a little higher than other sources, though. Click on the graph to see a much larger version. 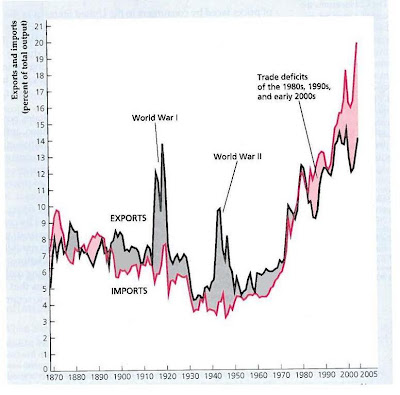 i have to say it is a wierd kinda blog where you say, we had a ?, and then you don't tell your readers what the ? is
in any event, does this simple graph explain the boom of the 50s/60s - we were living off of our exports, just as japan did in the 80s and china is today

ps: same blog problem with the next post; what is the point ?? do you have an opinion ?? what is the relevance of guatemalan garbage heaps to the us ?

There actually is no problem or anything weird going on. I clearly stated that these two entries were related to issues that came up in my class. I simply thought the garbage article was interesting, showing how economic incentives can be at work in surprising ways. Sorry if I wasted your time