Does It Matter If We Call Entrepreneurs Heroes? 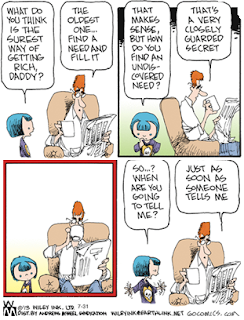 [i] Cyril Morong, "The Creative-Destroyers: Are Entrepreneurs Mythological Heroes?" (Presented at the annual meetings of the Western Economic Association, July), 1992, available at: http://cyrilmorong.com/CreativeDestroyers.pdf
Cyril Morong, "The Calling of the Entrepreneur," The New Leaders: The Business Bulletin for Transformative Leadership, November/December 1992, p. 4, available at:  http://cyrilmorong.com/ENTREPRENEURshort.pdf
Cyril Morong, "Mythology, Joseph Campbell, and the Socioeconomic Conflict,” The Journal of Socio-Economics, Volume 23, No.4, Winter 1994, pp. 363-382, available at:  http://cyrilmorong.com/MythCampbellSocioEconomic2.pdf
[ii] Wyn Wachhorst in Thomas Alva Edison: An American Myth (Cambridge, MA: MIT Press, 1981), pp.74-86, uses Joseph Campbell's book The Hero With a Thousand Faces to analyze part of Edison's early life, although Wachhorst suggests that Edison might have been more trickster than hero. Wachhorst quotes David McClelland from The Achieving Society with: "Interestingly, David McClelland found that Hermes, the trickster of the Greek pantheon, is the mythological type which best reflects the "achievement personality [of entrepreneurs]."" Morong (1992a) also mentions tricksters. The word entrepreneur does not appear in the index of the Edison book. So Wachhorst probably did not look at any research on entrepreneurs in general. He did not mention Schumpeter and creative destruction, either. Wachhorst often compares Edison to Prometheus, suggesting that using electricity is like stealing fire.
[iii] Israel Kirzner, Perception, Opportunity, and Profit (The University of Chicago Press, 1979), p. 163, 181.
From personal correspondence with Israel Kirzner he writes "I should point out in my own treatment of the entrepreneur, he is not seen as a "hero." Moreover, in my own treatment pure luck is not seen as entrepreneurial. (but as the act of deliberately putting oneself into a situation which one hopes will prove lucky is entrepreneurial)." It is my contention that the best way for a person to put themselves into a situation in which they will be lucky is for them to follow Campbell's advice that is based on his analysis of the hero's adventure. This is to follow your bliss, to listen to the wisdom of your heart and do what you love, not what the social system would have you do. If you follow your bliss, you are a hero. I believe that the most successful entrepreneurs follow their bliss and are therefore heroes. Jeffery McMullen (cited below) also mentions that entrepreneurs follow their bliss.
Joseph Schumpeter, The Theory of Economic Development (New Brunswick, NJ:Transaction Books, 1983), p. 923 lists three classes of motives for entrepreneurship: the will to found private kingdom, the will to conquer, and the joy of creating. The first, although seemingly only greedy, ranges, however, from "spiritual ambition down to mere snobbery." The second was like a sporting event, with money used to keep score, and not an end in itself. The entrepreneur of the third class of motives is in it for the sake of "exercising one's energy and ingenuity" and for the delight in venturing. All three classes of motives are anti-hedonistic, with the third being the most so. This certainly makes it plausible to see the entrepreneur as someone who follows his or her bliss.
[iv] Candace Allen and Dwight Lee, "The entrepreneur as hero," Journal of Private Enterprise, Volume 12, No. 1, Fall 1996, pp. 1–15.
[v] Dwight Lee and Candace Allen Smith,  “The Entrepreneur on the Heroic Journey,” The Freeman, Vol. 47 No. 4, April 1997, available at: https://fee.org/articles/the-entrepreneur-on-the-heroic-journey/
[vi] Jeffery McMullen, "Are we confounding heroism and individualism? Entrepreneurs may not be lone rangers, but they are heroic nonetheless," Business Horizons, Volume 60,          Issue 3, May–June 2017, pp. 257–259.
[vii] Charles Y. Murnieks, Jeffery S. McMullen, and Melissa S. Cardon, "Does Congruence with an Entrepreneur Social Identity Encourage Positive Emotion Under Environmental Dynamism?" Journal of Small Business Management, 27 February 2017, doi:10.1111/jsbm.12335, abstract available at: http://onlinelibrary.wiley.com/doi/10.1111/jsbm.12335/abstract
[viii] Barbara Haislip, "Tell Me a Story," The Wall Street Journal, May 1, 2017, page R8, available at: https://www.wsj.com/articles/an-entrepreneurs-story-can-be-the-perfect-marketing-tool-1493604360
[ix] Jeffery Sparshott, "Sputtering Startups Weigh on U.S. Economic Growth," The Wall Street Journal, October  23, 2016, available at: https://www.wsj.com/articles/sputtering-startups-weigh-on-u-s-economic-growth-1477235874
[x] Allen and Lee (1996) mention that "during the 1980s almost 90 percent of all business characters on television were portrayed as corrupt." It does not seem like there are many movies or TV programs even now that show entrepreneurs in a positive light.
[xi] Deirdre McCloskey, "Liberty and Dignity Explain the Modern World": An Essay Based on Bourgeois Dignity: Why Economics Can't Explain the Modern World, November 2011, available at: http://www.deirdremccloskey.com/articles/bd/briefBD.php.
[xii] Deirdre McCloskey, "Ideas, Not "Capital," Enriched the World," March 19, 2016, available at: https://fee.org/articles/ideas-not-capital-enriched-the-world/
[xiii] Deirdre McCloskey, "A Kirznerian Economic History of the Modern World,"  June 17, 2011, available at: http://www.deirdremccloskey.com/editorials/kirzner.php
[xiv] McCloskey also writes that the growing freedom and increasing respect for entrepreneurs "created more and more opportunities for Kirznerian alertness." Furthermore "Austrian discovery and creativity depends also on the other virtues, in particular on Courage and Hope" and "A new rhetorical environment in the eighteenth century encouraged (literally: "gave courage" to the hope of) entrepreneurs." She does, however, see a weakness in that Kirzner does not consider the audience of the entrepreneur, the customers and the rhetoric they use.
Posted by Cyril Morong at 6:48 AM