Liechtenstein In Number One!

In per capita GDP, that is. In my macro classes this week we started talking about GDP (gross domestic product or the value of all the goods and services produced in a country in a year). The CIA has a ranking of all countries by their per capita GDP (that is, GDP divided by population). That ranking is at Country Comparison: GDP per capita (PPP). The figures are all stated in dollar terms, so they use exchange rates to make the conversion from each country's own currency. They are also adjusted for "purchasing power parity" or the cost of living. One good thing about this list from the CIA is that each country is a hot link. If you click on a country you go to it's home page and there is alot of info there. Here is the top 10: 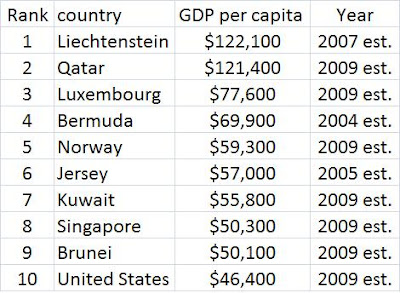 Here is something I reported last year:

"The country of Guinea-Bissau has a population of 1.5 million. But their GDP was only about $900 million. That is less money than the movie "The Darknight" has made, even if you take into account its production costs."

So Avatar, too, has probably earned more money than the GDP of some countries (it is up to about $2.2 Billion in revenue and may have cost around $400 million to make).

Click here to read last year's post on GDP. It mentions that Liechtenstein was having some problems in the banking system. One thing the CIA said was: "In 2008 Liechtenstein came under renewed international pressure - particularly from Germany - to improve transparency in its banking and tax systems."
Posted by Cyril Morong at 2:06 PM