What Was The Rate Of Inflation Last Year? Was It Positive Or Negative?

First, a note to my students. I added some links and informaton to the last post on religion and economics.

This may not be as simple a question as you might guess. You can get data on this from the Bureau of Labor Statistics at Consumer Price Index. The official rate is 2.7%. Why?

The table below shows the CPI in each month for each year and then the % change month-to-month going forward a year. 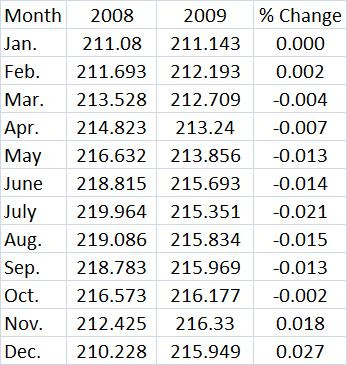 When you look at the BLS web site linked above, you will see in the last column a -0.4 or a -0.4% (the site does not put any % signs in). That is just rounded up slightly from the actual -0.356%. The last year there was a fall in the CPI, whether by the December-to-December method or the monthly average method was 1955 (it was only the monthly average that was negative).

Usually, the two methods are within 1 percentage point of each other (58 out of 96 years). But in each of the last two years, they differed by more than 3 percentage points (in 2008, the Dec-Dec rate was 0.1% while it was 3.8% using monthly averages). The last time there were two straight years like that was from 1946-48. So we must be having some pretty big month-to-month fluctuations. The graph below shows the absolute difference between the two methods for each year since 1914. Notice that the differences became larger in the last few years. 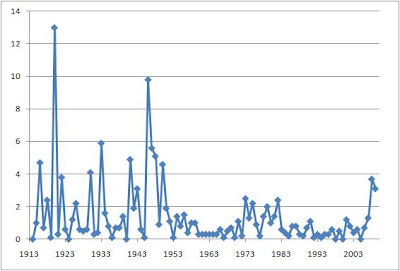