By Summer Said, Georgi Kantchev and Neanda Salvaterra of the WSJ.

Cartels seek to raise price by having all of its members cut output. By acting as one company, a monopoly, they actually increase profits for all members. But there are incentives for members to cheat and try to sell more oil than their quota. This drives down the price. But producers who are not part of the cartel, like U.S. companies have more of an incentive to produce oil, which then drives the price back down.


"OPEC is running smack into a wall of crude-oil storage.

The global oil glut is proving immune to the limits set by the Organization of the Petroleum Exporting Countries and its big-producer allies like Russia, fueling the idea that output caps withholding almost 2% of world crude supply were a miscalculation.

Both Brent, the international benchmark, and West Texas Intermediate, the U.S. price setter, fell almost 4% to their lowest levels of 2017 on Wednesday after the release of fresh data about inventories. Overall, prices are down over 17% since the beginning of the year.

In the U.S., the Energy Information Administration said Wednesday that crude stockpiles fell last week by 1.7 million barrels, less than the 2.6 million drop forecast by a Wall Street Journal survey. At the same time, gasoline inventories rose by 2.1 million barrels, compared with the survey’s expectation of a 700,000 decline, underlining worries about the oversupply extending to crude oil’s products.

Oil stockpiles in the Organization for Economic Cooperation and Development—a club of 35 countries with industrialized economies—rose by 18.6 million barrels in April and were higher than they were when OPEC agreed to its cut late last year, said the International Energy Agency, a Paris-based group that advises governments on energy trends.

Adding to oil traders’ angst: U.S. oil production has come roaring back to life. The IEA said U.S. crude supply will grow almost 5% on average this year, and nearly 8% in 2018, potentially vaulting American producers ahead of Saudi Arabia in daily output."


"Bjarne Schieldrop, chief commodities analyst at SEB Markets, the Nordic bank, said “It would stimulate production in the U.S. too much and this is basically what we are seeing."

"Eugen Weinberg, an oil analyst at Commerzbank, said OPEC needed to end its production cut. “The only option that OPEC has for the next five years is to let the market go”"

"OPEC representatives ... pointed to a problem of rising production from Libya and Nigeria, which were exempted from obligations."

"Daniel Yergin, vice chairman of IHS Markit and a long-time oil market watcher, said OPEC wouldn’t abandon its production-cut agreement, which took almost a year to put together through 2016.

“When OPEC and the other producers agreed to this deal, they hoped that, as the old adage says, time heals all—and time will heal the inventory problem,” Mr. Yergin said. “They should now take a deep breath and realize this will take a lot more time.”"

Click here to see historical gas prices. They fluctuate quite a bit, showing that OPEC cannot always maintain its hold on the market. (that only goes up through 2015. Gas prices went down almost 13% in 2016 compared to 2015, adjusted for inflation and so far this year they are up about 8% over last year).

The book The Economics of Public Issues by Roger LeRoy Miller, Daniel K. Benjamin and Douglass C. North has a chapter on cartels that discuss OPEC and why it cannot always meet its objectives. They point out the conditions necessary for cartels to work: 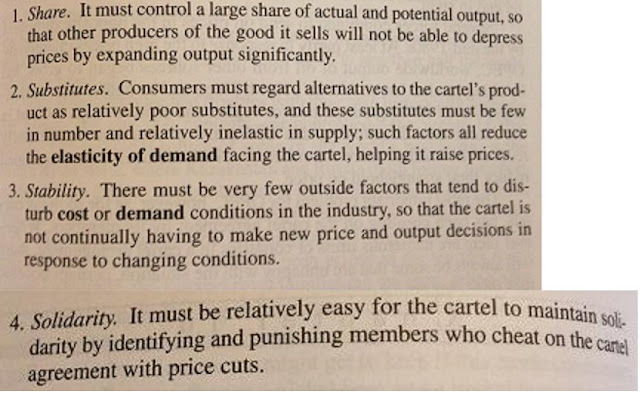